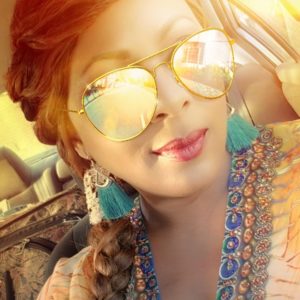 There’s many versions of drag that’s splintered off from the traditional, historically referenced “man in a dress” version. There’s High and Low Camp Queens, Skag Drag, Genderfucks, Pageant Queens, Tranimals, Drag Kings and the list goes on. There’s also Bio Queens: anatomically correct women who perform in an often exaggerated, theatrical manner, much as a traditional show queen would, but hijacking the gender construct of drag. Kind of a Victor/Victoria ruse. It can get really psycho-socio-homo-sexually philosophical and I’m not about to tackle that. What I would like to talk about Taylor “Slay” Rene’. Headquartered in Blythe, California, where she owns and operates her own dance school and studio, Taylor Rene’ is tearing up stages across Arizona and beyond, making a mark with audiences as a Bio Queen “Femme.”

“I’m a biological, anatomically correct female. I’m also a girl who performs in drag,” she says. That includes the glitter, wigs, heels, makeup, eyelashes … everything. As Kiva Hollywood (her real name, I kid you not) her résumé includes gigs as a Phoenix Suns Dancer, a Seattle Seagal, and as an Arizona Cardinal’s Cheerleader. 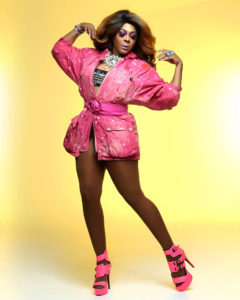 “I’m a choreographer and created dance numbers for drag queens, and I loved it,” she told ION. “They all told me, ‘You should do drag!’ So I started performing in drag about six years ago, doing Beyoncé, Janet Jackson, and Tina Turner, but eventually turned to being an original. They say, ‘Always be true to yourself.’ And for me that’s ‘Taylor Rene’.’”

That’s when Kiva really caught the Bio Queen drag bug. “I loved the opportunity to be free on stage, but I had a voice too,” she said, “I didn’t want to lip synch and wanted to do my own singing; I started creating my own music and singing about four years ago; however, I keep the drag aesthetic while performing. It’s the best of both worlds.”

She’s headlined at Tucson Pride and Bisbee Pride in addition to tearing up the stage at Paz Cantina on Roosevelt Row in downtown Phoenix this summer. This past April Taylor Rene’ showed the girls in Palm Springs how it’s done at the legendary Dinah Shore Open. 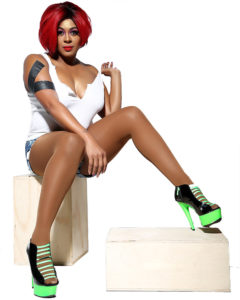 “I couldn’t believe it! I’m really connected to this incredibly large, all-female audience. They treated me like a celebrity! I was riding in Escalades, staying in the best hotel. It was like a true life version of The L Word,” she laughs. “It was such an honor. I’m the ‘L’ of LGBTQ,” she shared. “I’m on the lesbian side of the fence—I’m out and I’m proud!”

Her fan base is growing. “I get to meet so many amazing people. I’m surprised at how many people have reached out to me because of my music. My song ‘Reach Out’ is about anti-bullying and suicide prevention. I’ve had many young people tell me that it helped them. I once a woman tell me that she listened to ‘Show Me That Slay,’ every day while she was going through a bad divorce. She said it was her ‘empowerment song.’ It’s exciting and dancey.” Taylor Rene’ wrote both songs.

“I want people to know that I’ve worked really hard for myself on this  journey. Nothing was handed to me. Off stage I’m really shy, but the ‘Taylor Rene’’ persona helps me channel my bigger self.” The future? “I’d really like to go on tour. Bigger than life shows. Truthfully, my worlds collide … during the day I’m a girl in a t-shirt and pony tail; from that I go from that to glitter, sequins, big hair, lashes. Glitz and glam all the way!”

With special thanks to booking agent Diesoul Evans, you can catch Taylor Rene’ every second Friday at Caravan Taproom at 10 p.m. for S.W.A.G. (Sexy, Wild and Gay) Fridays. She’ll be opening (with her dance school kids as backup dancers) on September 29 for gay rapper Lil Nas X at the Sandbox Music Festival at the Scarizona Scaregrounds, 1901 N. Alma School Road in Mesa. Tickets available at SandboxAZ.com.